Friday, August 19, 2022 - AgeTM
travel Magazine
Experience Salisbury Plain – Expedition South Georgia
Antarctic Voyage: To the End of the World and Beyond...
How do penguins survive in Antarctica?
Egypt Travel Guide
How long is a day in Antarctica?
travel Magazine » The world's largest cuckoo clock in the Black Forest

The world's largest cuckoo clock in the Black Forest

No visit to the Black Forest is complete without a cuckoo clock and of course a visit to the world's largest cuckoo clock should not be missing. Beautiful carvings, moving figures, simple woodwork and ornate, finely crafted scenes. Small, large and accessible cuckoo clocks - there are all of them in the Black Forest. The actual origin of the cuckoo clock has not yet been clarified exactly. The fact is that the world-famous Black Forest design was created in several steps and through various influences. Over generations, extraordinary craftsmanship has developed around the beautiful watch and it has become a symbol for the region. Large watch houses and small family businesses invite you to stroll and be amazed. At every full and half hour the melodic whistles of the beautiful wooden clocks call a happy cuckoo over the fir-covered valleys.

The world's first largest cuckoo clock can be viewed in Schonach. In 1980, after three years of construction, it was completed by watchmaker Josef Dold. It was the world's first walk-in cuckoo clock. The imposing clockwork was handcrafted with an electric jigsaw and is 3,30 meters high. 50 times larger than a normal clockwork. The idea for this unusual project arose while working. The clockmaker also regularly received cuckoo clocks for repairs and many customers wanted to know more precisely what was defective. It is difficult to explain this with the small gears of a clockwork, and so the idea for a large model clock was born, and with it the idea for the largest cuckoo clock in the world. 10 years later, this idea was taken up by the Eble clock park in the neighboring town of Triberg and a walk-in cuckoo clock was also installed there. With a scale of 1:60, this is even larger than the original in Schonach and currently holds the record in the Guinness Book with a clockwork 4,50 meters high. 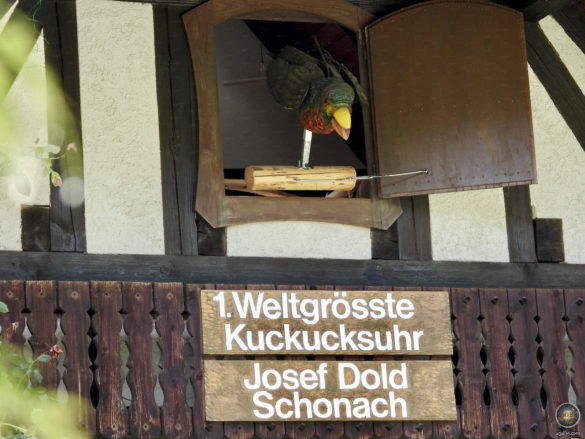 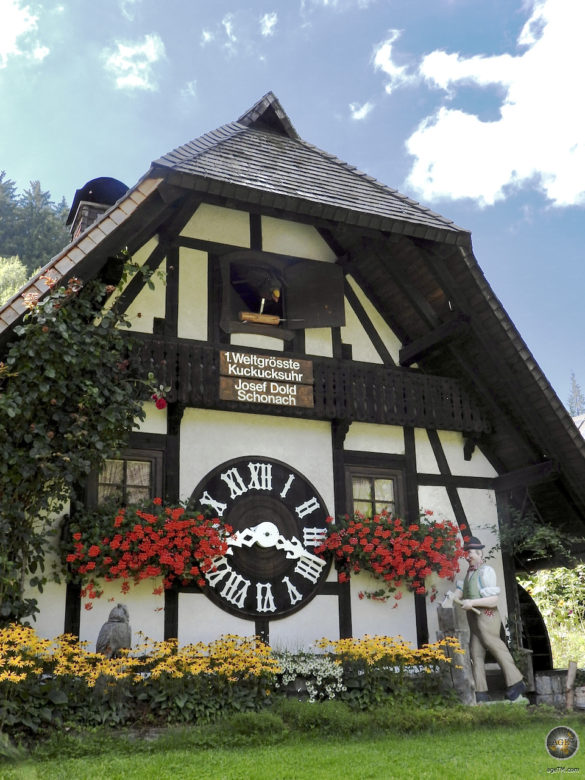 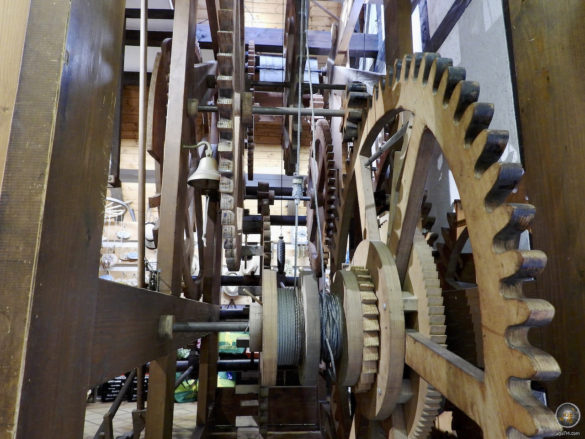 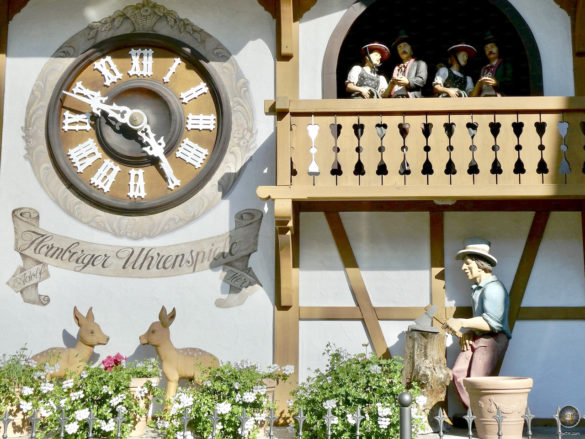 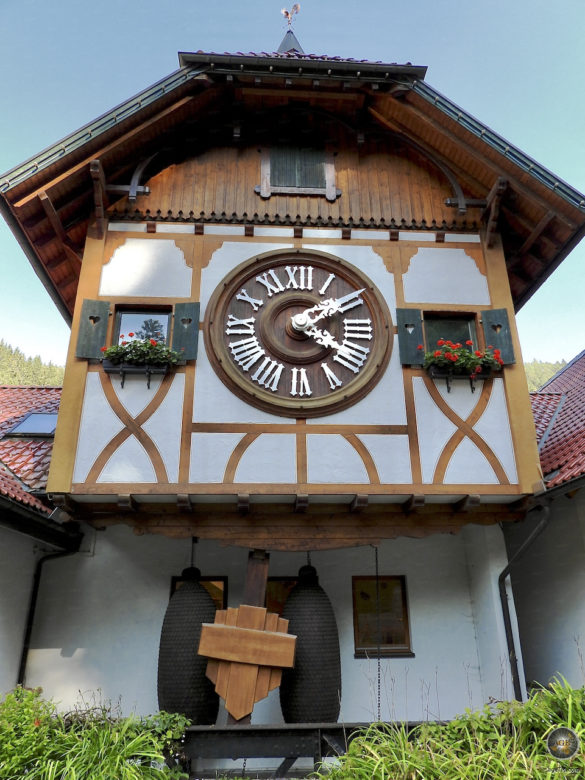 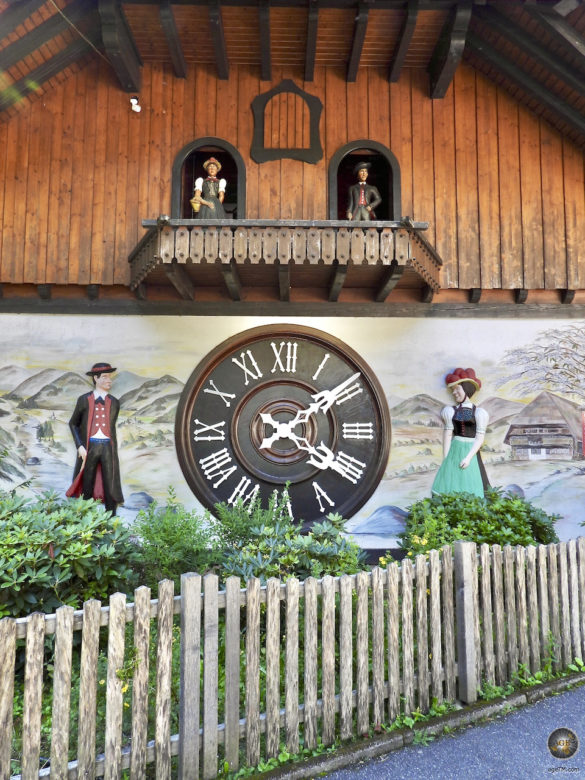 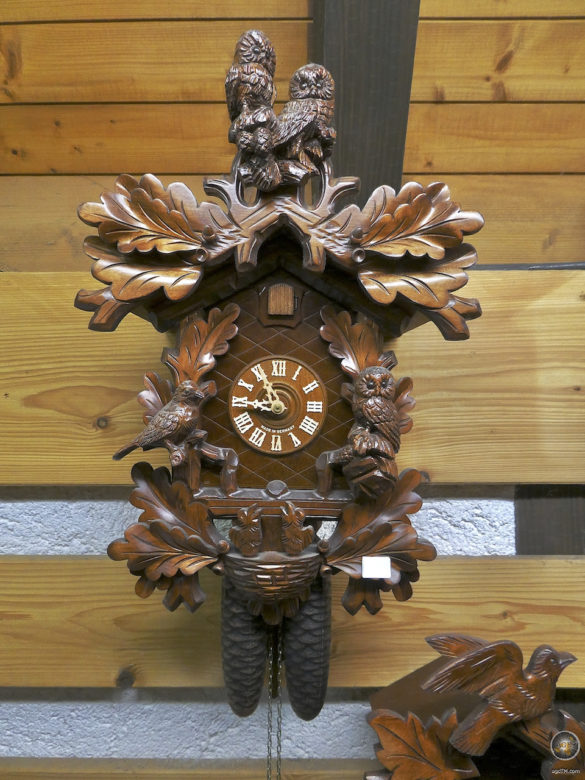 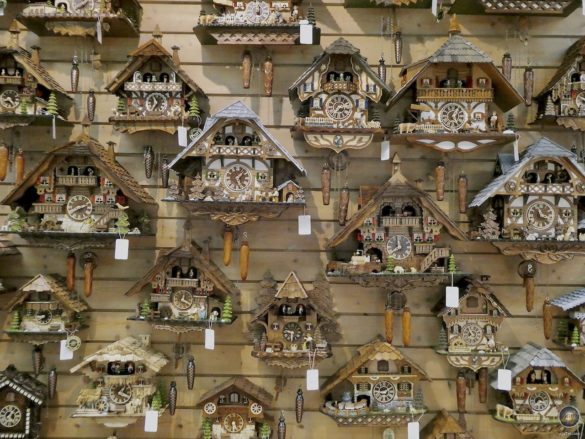 Tick ​​Tack, Tick Tack, Tick Tack. The pendulum of the monumental wooden clock swings to the beat in the unswerving rhythm of time. I stand in amazement in front of this magical work of precise mechanics. A large wooden gear slowly surrenders to a leaden weight, the only fuel for this mighty clockwork. The pointer moves slowly over the dial. Not too fast and not too slow. Then it strikes three o'clock. Clack and clack and clack suddenly more wooden gears start their work and I watch with fascination how the entire clockwork starts to move. Cogwheels interlock, a small door opens, two bellows blow air into the pipes and then it sounds - the call everyone has been waiting for. Cuckoo, cuckoo, cuckoo, the huge cuckoo clock comes to life.

AGE™ has visited the world's largest cuckoo clocks for you:

The world's first largest cuckoo clock in Schonach is lovingly cared for as a family business. The entrance on the back leads to the inside of the clock. A small tour offers interesting insights into how the clockwork works and how it was created. Past the impressive gears and the 70 kg weight that drives the mechanics, the visitor arrives through a side door to the front view. The beautiful facade is complemented by a small water wheel, a movable lumberjack figure and colorful floral decorations, which provide a suitable rural idyll. Benches in the green invite you to linger. Anyone who wants to can return to the clockwork at any time and take a second, interested look at the mechanics and whistles. The cuckoo call can also be triggered manually if necessary, which is very convenient for waiting groups.

Currently the world's largest cuckoo clock in Triberg is integrated into a large watch shop. The facade front is freely accessible and is located on the side of the building facing away from the parking lot. Unfortunately, the main road passes directly behind the clock, which tarnishes the Black Forest feeling a bit. For this purpose, pine-cone-shaped weights and an ornamental pendulum were integrated into the front of the Triberg clock. This corresponds exactly to the typical appearance of the world-famous watch design, also in XXL format. If you want to visit the clockwork, you can go through the main entrance of the clock shop and a staircase to the large-format mechanics of the world's largest cuckoo clock. Multilingual tours for large groups of coaches are also offered.

Experiences with the world's largest cuckoo clock in the Black Forest:

In today's digitized world in particular, it is fascinating to take a look at the perfectly coordinated mechanics of a traditional cuckoo clock. The world's largest cuckoo clocks combine experience, technology and culture.

What does it cost to visit the world's largest cuckoo clock?

Viewing the record watches only costs about 2 euros. A small contribution to maintenance. Please note possible changes. As of 2022.

• Prices as a guide. Price increases and special offers possible.

What are the opening times of the world's largest cuckoo clocks?

How much time should I plan?

The tour of the clockwork takes a few minutes. It can be extended by interested questions. The cuckoo calls on the full and half-hour. If you are interested in the traditional facade of the clock and the mechanics, AGE ™ advises you to wait twice for the cuckoo for a complete experience. Outside at the top of the hour, when the wooden bird comes out of the door, and inside at half an hour to watch the cogwheels start up that drive the cuckoo and the organ pipes.

Is there food and toilets?

Unfortunately, toilets can no longer be offered due to the regulations on COVID19. As of 2021. Meals are not included. It is advisable to take a snack with you and then stop off at a local café for a good Black Forest cake. Groups of 10 or more people can take part in a wine tasting as part of the clockwork tour in Triberg.

Where is the world's first largest cuckoo clock located?

Where is the world's largest cuckoo clock?

Which sights are nearby?

The two cuckoo clocks are only 7 minutes away by car and can therefore easily be combined if you are interested. A visit to the clocks can be perfectly combined with a tour of the Triberg waterfalls combine, the highest waterfalls in Germany. The Black Forest is also located in Triberg Vogtsbauernhof open-air museum with traditional farmhouses. If you like it a little more action-packed, you can then take the around 20 km away Gutach summer toboggan run Rush into the valley and enjoy the beautiful view.

Who Invented the Cuckoo Clock?

The roots of the cuckoo clock:
As early as 1619, Elector August von Sachsen was in possession of a clock with a cuckoo. The exact origin of the cuckoo clock idea is unfortunately not known to this day. In 1650 the production of the cuckoo call by organ pipes in combination with a movable cuckoo figure was mentioned in the manual for music "Musurgia Universalis" and in 1669 the idea of ​​using the cuckoo call as a time announcement was published.

How the cuckoo moved to the Black Forest:
The first cuckoo clocks were built in the Black Forest in the 17th century. It remains unclear who was the lucky first. Franz Ketterer from Schönwald cites a version of contemporary history for the early 1730s as the inventor of the cuckoo clock. Evil tongues claim that he originally wanted a rooster to live in his clock, which should crows every hour. However, this project turned out to be too difficult. The sound of the organ pipes inspired Franz Ketterer and a clear penetrating call with only two tones became the solution. The rooster had to step back, the cuckoo was allowed to move in and the Black Forest cuckoo clock was born. Another version of contemporary history, on the other hand, reports that watch dealers met a Bohemian colleague with wooden cuckoo clocks in 1740 and brought the idea back to their homeland. In 1742 Michael Dilger and Matthäus Hummel are said to have made the first cuckoo clocks in the Black Forest.

How the cuckoo got his house:
The first cuckoo clocks did not have much in common with today's world-famous design. Until the 19th century, the cuckoo was built into a wide variety of clocks. In 1850, after a competition by the director of the Grand Ducal Badische Uhrmacherschule Furtwangen, the so-called Bahnhäusleuhr began to prevail. For this competition, Friedrich Eisenlohr attached a clock face to a station keeper's house and thus also created the basis for today's typical cuckoo clock design in the shape of a house. In the next few years the development of the typical Black Forest cuckoo clock began. In 1862, Johann Baptist Beha from Eisenbach sold cuckoo clocks with weights in the shape of a pine cone for the first time, and lavish carvings to decorate the clocks became popular. Today the cuckoo clock is a world-famous landmark of the Black Forest and just like the Black Forest Bollenhut or the Black Forest cake, it is no longer possible to imagine the region without it.

Where can I find the world's widest cuckoo clock?

Another record clock can be viewed just 5 km from Triberg and 9 km from Schonach. She stands in front of the House of Black Forest Clocks, a family-run clock shop in Hornberg. The so-called Hornberger Uhrenspiele were inaugurated in 1995 and are entered in the Guinness Book of Records as the widest cuckoo clock in the world. If you throw a euro into the oversized music box, you bring it to life. The wooden figures begin to dance and the cuckoo also leaves his house on command. 21 moving figures give the widest cuckoo clock its special charm.

Where did the first oversized cuckoo clock come from?

An oversized cuckoo clock was built for the first time in 1946. Not in the Black Forest, however, but in Wiesbaden, as an advertisement in front of a souvenir shop for souvenirs from Germany. This cuckoo clock is not accessible, but it was still the largest cuckoo clock of its time. It can still be viewed today in Burgstrasse in Wiesbaden. From 8 a.m. to 20 p.m. the cuckoo shows up every full and half hour.

Visit a nearby cultural monument: The Rainhof barn is a traditional inn with a Black Forest atmosphere and themed rooms.

Copyrights and Copyright
Texts and photos are protected by copyright. The copyrights of this article in words and images are entirely owned by AGE ™. All rights reserved. Content for print / online media can be licensed on request.
Source reference for text research
Information on guided tours on site, as well as personal experiences when visiting the world's largest cuckoo clocks in September 2021.

The Rainhof barn in the Black Forest

This website uses cookies: You can of course delete these cookies and deactivate the function at any time. We use cookies in order to be able to present the contents of the homepage to you in the best possible way and to be able to offer functions for social media as well as to be able to analyze the access to our website. In principle, information about your use of our website can be passed on to our partners for social media and analysis. Our partners can combine this information with other data that you have provided to them or that they have collected as part of your use of the services. Agree More information